#TropMed16 News
Global Health NOW is covering ASTMH every day with news bursts. Check out the news, and if you're in Atlanta, stop by exhibit 411 to say hi and tell us where in the world you'll leave your mark!

We enjoyed watching the ASTMH map fill in this week, and we are so happy to welcome our new ASTMH subscribers—including new sign-ups from Burma, Grenada, Italy, Liberia, Kenya, Thailand, and Venezuela! Welcome to the GHN community, and safe travels home.—DKM

Malaria: The Net Effect (11.16.16 at 11:29 a.m.)
Insecticide-treated bed nets still protect against mosquitoes, despite growing worry over insecticide resistance, according to a study released Wednesday at the ASTMH annual meeting

A 5-year investigation by the WHO, supported by the Bill & Melinda Gates Foundation, found that people using long-lasting insecticidal nets (LLINs) in Benin, Cameroon, India, Kenya, and Sudan—all areas with signs of mosquito resistance to insecticides showed significantly lower malaria infection rates. The WHO estimates that treated nets accounted for most (69%) of the 663 million malaria infections prevented in sub-Saharan Africa from 2001-2015.

“This study provides encouraging new that we have not yet run out of time in battling insecticide resistance,” said Stephen Higgs, PhD, president of ASTMH. Still, mosquito resistance remains a critical concern, and the WHO urges investment in the development of new and improved vector control tools.—DKM

Zika experts from Brazil and the US shared the following Zika insights during the Tuesday, Nov. 15 press briefing at the ASTMH conference in Atlanta:

Despite a burst of research in the past year and numerous ongoing studies, much remains unknown about Zika virus, requiring the US CDC to commit for the "long haul," Anne Schuchat, US CDC principal deputy director, told reporters during a press briefing at the ASTMH confernece on Tuesday, Nov. 15.

The CDC is working with state and local agencies on prevention and epidemiologic efforts as well as getting best available information to people, Schuchat said. Based on the experience with the dengue and chikungunya viruses, it’s unlikely that the Zika virus will become endemic in the US though in the Caribbean and Latin America it has not been just a “one-year phenomenon,” she said.

Still the CDC is engaged for the “the long haul,” Schuchat said. “We are sticking with this problem because we know what it means for families.” —BWS

In their second visit to the ASTMH, Cuban scientists from the Instituto de Medicina Tropical Pedro Kouri in Havana updated ASTMH attendees on the country’s research and control of viral diseases.

We're loving the ASTMH cup (though we had to Google Translate it to learn it means "to wipe out malaria"). We'll drink to that.

Aedes aegypti mosquitoes can double down on the threat to humans by carrying Zika and chikungunya viruses at levels that make it possible to infect people with both viruses in a single bite, according to new research presented at the 2016 Annual Meeting of the American Society of Tropical Medicine and Hygiene on Monday, Nov. 14.

Colorado State University scientists found “strong evidence that mosquitoes can pick up and transmit Zika and chikungunya simultaneously—something that had not been confirmed before, given the recent arrival of Zika in the Americas,” according to an ASTMH news release.

Scientists don’t know if mosquitoes can carry all three viruses at the same time though it’s been shown previously that the Aedes can harbor dengue and chikungunya simultaneously.

In another study released at ASTMH, Brazilian researchers investigating concurrent outbreaks of Zika, dengue and chikungunya found discovered 2 patients with Opsoclonus-myoclonus-ataxia syndrome. Sometimes called “dancing eyes-dancing feet syndrome,” OMS causes chaotic eye movements and muscle contractions. One of the patients had Zika and dengue, while the other had chikungunya and dengue. The scientists couldn’t confirm that co-infection was to blame. —BWS

Soon after being named the U.S. Global Malaria Coordinator in 2006, Timothy Ziemer found himself making a presentation to President George W. Bush.

He had been told no more than 8 slides, Ziemer recalled, as he looked back on a decade leading the President’s Malaria Initiative during a Monday, Nov. 14 talk at American Society for Tropical Medicine and Hygiene conference.

Ziemer was on his second slide when the president interrupted him. “I heard, ‘I got it Z. We’re done. Go save lives.’” Ziemer said. “Those are the kinds of orders I understand.”

The retired U.S. Navy rear admiral embraced the opportunity, creating an organization that Scientific American called “the best run and most effective of worldwide US government health efforts.” The secret, according to Zimmer, was working closely with in-country partners and having a clear vision and organizational structure.

“Leadership does matter. Organization does matter. A clear strategy does matter.  Clear policy guidance matters. Continuity of the program matters,” Ziemer told an appreciate audience of more than 600.

While celebrating the past successes, Ziemer warned about the coming “acid test” in the future, saying the next 5 to 10 years will be a make or break for global malaria efforts. “The challenge for all of us is to maintain what we’re doing at the moment in the face of low and declining disease burden,” he said. “As we look to future, we must stay focused. We must wrestle [malaria] to the ground. If we let go, the beast will come back with a vengeance.”—BWS

West Nile’s Toll Underestimated  (Monday, 11.14.16 at 4.45 p.m.)
West Nile Virus packs a heavier punch than realized previously, according to a new study tying the illness to a shorter lifespan.

After noticing that people who had seemingly recovered from West Nile Virus faced chronic health problems, Kristy O. Murray, DVM, PhD, of Baylor College of Medicine and Texas Children’s Hospital launched a study tracking 4,144 West Nile Virus patients in Texas from 2002 and 2012. Of that group, the researchers discovered, 554 people died—286 during the acute phase of illness, but 268 after they had seemingly recovered from the initial infection (“delayed mortality”). Among the latter group, kidney disease proved to be a significant cause of death, even among younger patients not commonly prone to the disease.

Murray, who shared her findings at the ASTMH annual meeting today, hopes that the findings will spur more interest and funding toward preventive research against West Nile Virus, including vaccine development.—DKM

Global malaria mortality rates fell by 60% from 2000 to 2015, demonstrating the power of global prioritization and budgetary investment.

Before 1998, only $100 million per year was spent on malaria control globally—a small amount compared to the need, said Bernard Nahlen, deputy coordinator of the U.S. President's Malaria Initiative, during a presentation at the American Society for Tropical Medicine and Hygiene conference on Monday, November 14.

By 2005, the global investment was increasing by 43% per year. PMI alone has invested $4.4 billion in the malaria fight since it began in 2006, according to Nahlen.

The current PMI strategy calls for reducing malaria mortality in 2015 by an additional 1/3 by 2020.—BWS

Where Will You Make Your Mark? 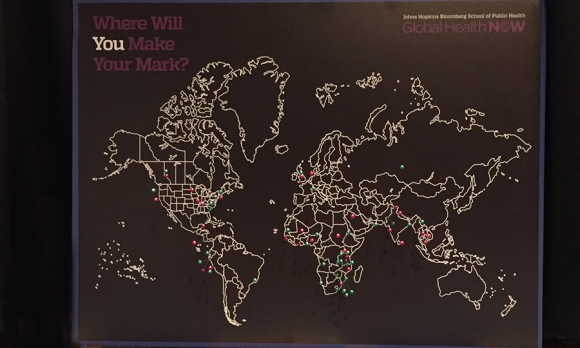 Put a pin on the GHN map marking where you're from and where you're doing research. Stop by the GHN exhibit and add your place in the world! Australians wanted. :)

Loiasis, a filarial worm infection, is not the benign disease it was once assumed to be—it’s associated with increased mortality risk. That’s the conclusion of a study based on research in Cameroon, supported by DNDi and presented at ASTMH #tropmed2016 on Monday, Nov. 14.

After initial surveys of villages in eastern Cameroon in 2001, the researchers returned this year and found that people with high loa density in their blood have a reduced survival chance of 20% compared to those with no filarial in their blood—and up to 15% of deaths could have been avoided.

While the results, published in the Lancet Infectious Diseases last month, show a heavy clinical burden, it needs to be precisely quantified—the study underscores the gap in funding for filarial disease research.

Next steps should include clinical studies and research for new treatments—and possible inclusion on the WHO list of neglected tropical diseases, researchers said.—Dayna Kerecman Myers

Atlanta before the dawn of #tropmed16's first full day, Monday, Nov. 14. Note the people working out in the Marriott gym.

Zika’s key lesson, according to PAHO Director Carissa Etienne: Public health agencies cannot wait until all the evidence is in before taking action against emerging threats.

“New diseases bring new challenges, and decisions must be made even with limited evidence. The Pan American Health Organization, the World Health Organization understand that responsibility, and we must be willing to make the guesses, so to speak, the decisions that are based on incomplete evidence,” Etienne said in her keynote address to the 65th annual conference of the American Society for Tropical Medicine and Hygiene on November 13. “The guiding principles in the case of Zika in the Americas has been to act with caution and also with due urgency and placing priority on protecting the most vulnerable.”

Etienne stressed the importance of well-trained frontline health care workers and the need for them to work closely with scientists and researchers to inform timely response.

Since Zika’s outbreak began in Brazil in the spring of 2015, an estimated 700,000 suspected and confirmed cases have been reported in 48 countries and territories in the Americas and 67 countries total worldwide have reported evidence of mosquito-borne Zika transmission, according to Etienne.

“We are still just beginning to understand the full impact that his virus will have on the health of people of the Americas,” she said. “This is not a 100-meter dash. I believe this is a marathon in which science and public health need to work hand in hand.”—Brian W. Simpson

If you’re attending the 65th annual meeting of the American Society for Tropical Medicine and Hygiene, be sure to stop by GHN's booth, exhibit 411!
Let us know where you’ll make your mark in global health by putting a pin on our spiffy global map. And encourage your friends and colleagues to subscribe to GHN.

If you won’t be there, be sure to check out our exclusive coverage this week, right here and in our daily enewsletter.

And tune into the #TropMed16 Fireside Twitter Chat on Monday, November 14th from Noon to 1:30 p.m. ET. #Malaria experts will be in the hot seat. Search: #TropMedChat.

ASTMH attendees making their mark on the world