Tigray (and Its Health Care System) Under Siege

Biostatistician Mulugeta Gebregziabher has been anxiously following details of the brutal conflict that has engulfed Tigray since late 2020. Drawing on his statistical skills and connections in his former home, he has documented the toll of Ethiopia’s war on its northernmost regional state.

Attacks on Tigray’s health care infrastructure have been devastating. At least 22 health workers have been killed, and just 1,300 of the region’s 20,000 health care workers were working last year because of the war, he said. Just 3.6% of Tigray’s 1,007 health facilities are fully functional.

Gebregziabher, a professor of Biostatistics and vice chair for Academic Programs at the Medical University of South Carolina, grew up in Adwa, Tigray and left for the US nearly two decades ago. But his mother still lives there. He hasn’t been able to speak with her for months.

The humanitarian crisis enveloping the 7 million people of Tigray has worsened since the Ethiopian and Eritrean governments and 2 local militia forces blockaded the state in June 2021. “They switched off the electrical grid last November,” Gebregziabher said in an April 1 interview. “The same thing for their main telecom operator—no telecommunication, no internet services. Transportation has been blockaded.”

Gebregziabher will speak at a Wednesday, April 13, event about attacks on health care. In advance of the event, he shared insights on the current situation in Tigray with GHN.

What are the war’s impacts on Tigray?

The short-term impact is death of children, women, and the elderly from infections, severe malnutrition, physical and sexual attacks and trauma. These are exacerbated by the deliberate denial of basic necessities and services through blockade and siege. The displacement of civilians for an extended periods of time (more than 16 months in the case of Tigray) is also another hazard of war which will have long term health impact on the civilian population.

The impact of these on health workers is enormous. For instance, in Tigray, the health workers have said to reporters that they have become “death certificate issuers” instead of rescuers of those affected by the war. The blockade of supplies and equipment makes their services impossible. Health care workers sadly reported that they “are sending patients home to die,” as treatment is not possible under these circumstances. Many health care personnel have not received salaries from the government for some time—they too are beginning to starve.

Is the government trying to starve people?

Yeah, it is really. Starvation is being weaponized.

There’s been lots of media coverage about what the US is doing in Ukraine. Is the US doing anything about Tigray?

The hostilities, I think, may be about to end because the Ethiopian government and the Tigray regional government have signed a truce eight days ago. And the whole purpose was for aid to go in. But for the last six days, there was no aid that w ent in. But today this morning, very good news that 17 trucks have been allowed in. I am very delighted that at least some people are going to get something to eat.

Often you hear about a situation like this, and it sounds so desperate that there’s nothing that can be done. But you’re saying that even legislation in the US has an impact.

In this case, it did. I am so grateful to the senators and the congressmen who led this effort, like Senator Menendez from New Jersey. The good thing is all these are passing with bipartisan support, actually with overwhelming support. I think the reality is sinking in the Ethiopian government because, reading the legislation, there is a lot of accountability and threats of sanctions that are put in there. If I were one of these leaders, I will be scratching my head because these are going to be people who would be appearing in the International Criminal Court. These crimes are unimaginable types of crimes.

The WHO Secretary-General Tedros, who is from Tigray, has spoken out very forcefully on the crisis. Does that make a difference—having Tedros in that position and speaking out?

Oh, it does. When he speaks the media covers it. He said, “the only Hell on Earth right now is Tigray.” And he said the worst humanitarian catastrophe that’s ongoing right now is in Tigray. I think his voice is very important. I am glad that he is there to at least shed light or bring light to the catastrophe.

Are there any signs of progress?

Until a couple of months ago, or maybe late February, there were still drone attacks, airstrikes.

I was just working on analysis of data that has all the airstrikes, all the drone attacks that have happened Tigray. Those have recently stopped because there is a lot of pressure from the Western countries, including the United States and the European Union. So that is not that’s not continued, but what has continued is the 360-degrees blockade. It’s under siege.

Ed. Note: This Interview has been edited for length and clarity.

An injured resident of Togoga village arrives at the Ayder referral hospital in Mekele, the capital of Tigray region, Ethiopia, on June 23, 2021. Yasuyoshi CHIBA / AFP via Getty Images 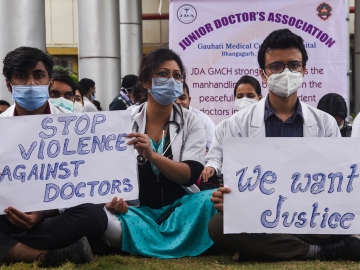